At disease -onset, the muscles of a SMA patient would develop symmetry, gradual degeneration and atrophic manifestation of weakness with the patient’s ability to control voluntary muscle movement, such as walking, crawling, swallowing, breathing, and controlling head/neck muscles, becoming increasingly affected or even leading death.

SMA is the biggest genetic killer of babies under two years of age. 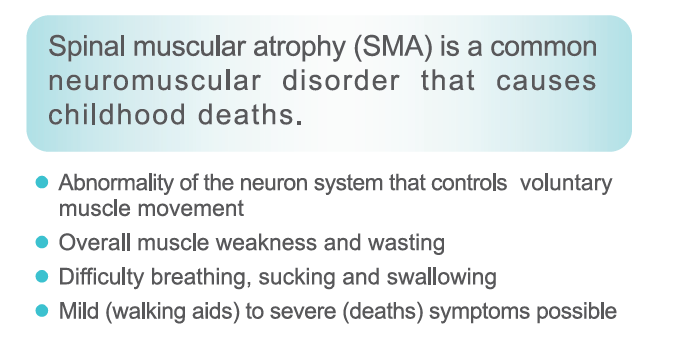 SMA is caused by abnormal SMN1 gene on chromosome 5. About 95% of SMA patients due to deletion of SMN1 gene, and the small number of patients due to some minor mutations leading to no functioning gene.1

The majority of normal persons have more than 2 SMN1 genes with only one SMN1 gene for carriers and none for persons with SMA.

On average, one carrier is presented in every 40–50 people. If both parents are carriers, they are healthy but carrying a defective SMN1 gene. Their every child has a 1/4 (25%) chance of being affected with SMA.

Who is recommended for testing?